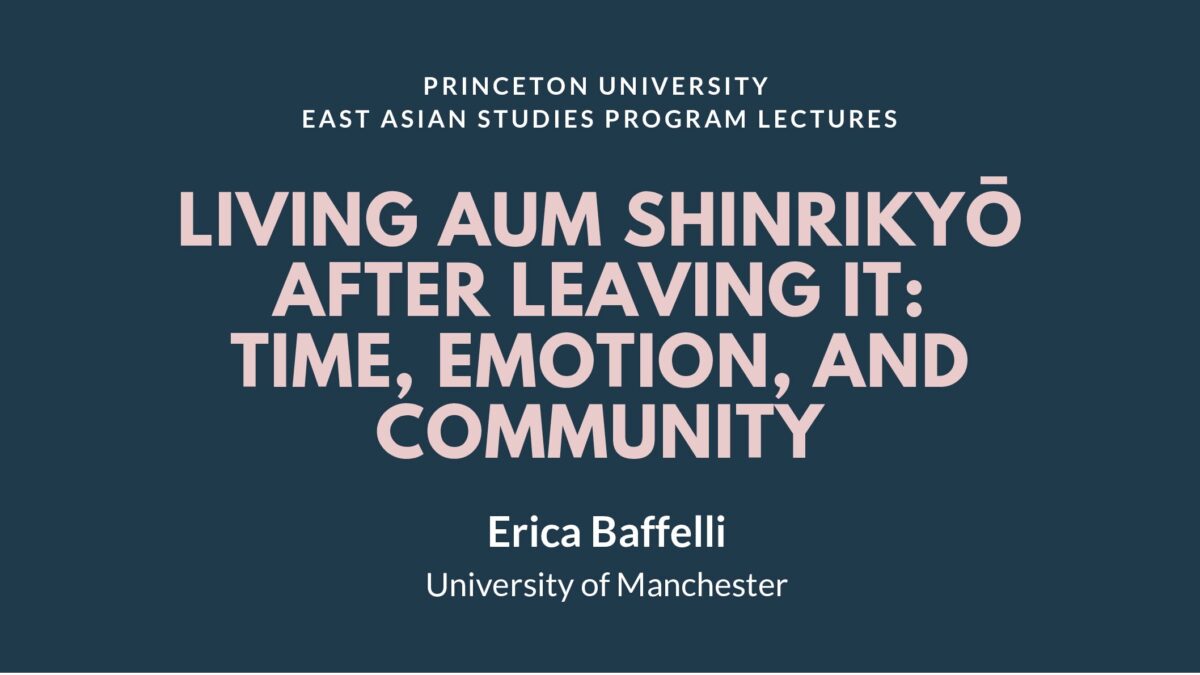 Abstract: On March 20, 1995 members of the religious organization Aum Shinrikyō perpetrated a sarin gas attack in the Tokyo subway. After the group was put under strict police surveillance, members who used to live in commune took different paths. In this talk we will discuss the experiences of female former members who decided to leave the organization after 1995 but were unable to completely reject Aum and the lives they had lived inside it. They returned to a life outside the organization, but they have continued to feel different, and to feel differently, from other people. I argue that these dynamics have bound them in an Aum “feeling community” despite their attempts to put Aum behind them. This community shares an emotional grammar, a way of feeling in and about Aum and its practices, that distinguishes it from people who have not shared their experiences. This emotional bond is created by the experience of extreme ascetic practices that were central to their Aum lives and status and by their emotional connections with the leader Asahara Shōkō. This community is also brought together by feeling “out of sync” with the emotional regime  and temporal rhythms of the mainstream society into which members were catapulted in 1995 – a society they had rejected in order to join Aum -, but also by the fact that the Aum community does not, and cannot, exist in the present. As such, it is a community characterized not by the presence of its members, but by the persistence of an absence that is both spatial and temporal. Based on interviews and material published by Aum, this talk discusses what it meant for these women to “live Aum” and why some of them have been unable to move on.

About the speaker: Erica Baffelli is Senior Lecturer of Japanese Studies and the Director of the North West Consortium Doctoral Training Partnership at Manchester University. Dr. Bafelli has a BA (Hons, 2000) and a PhD (2005) in East Asian Studies from Ca’ Foscari University (Venezia). Between 2005-2007 she was a visiting researcher at Hosei University (Tokyo) and post-doctoral research fellow of the Japan Society for the Promotion of Science. Before arriving at Manchester in 2013, she spent six years in New Zealand, working at the University of Otago as Lecturer and, from 2012, Senior Lecturer in Asian Religions (2007-2013).