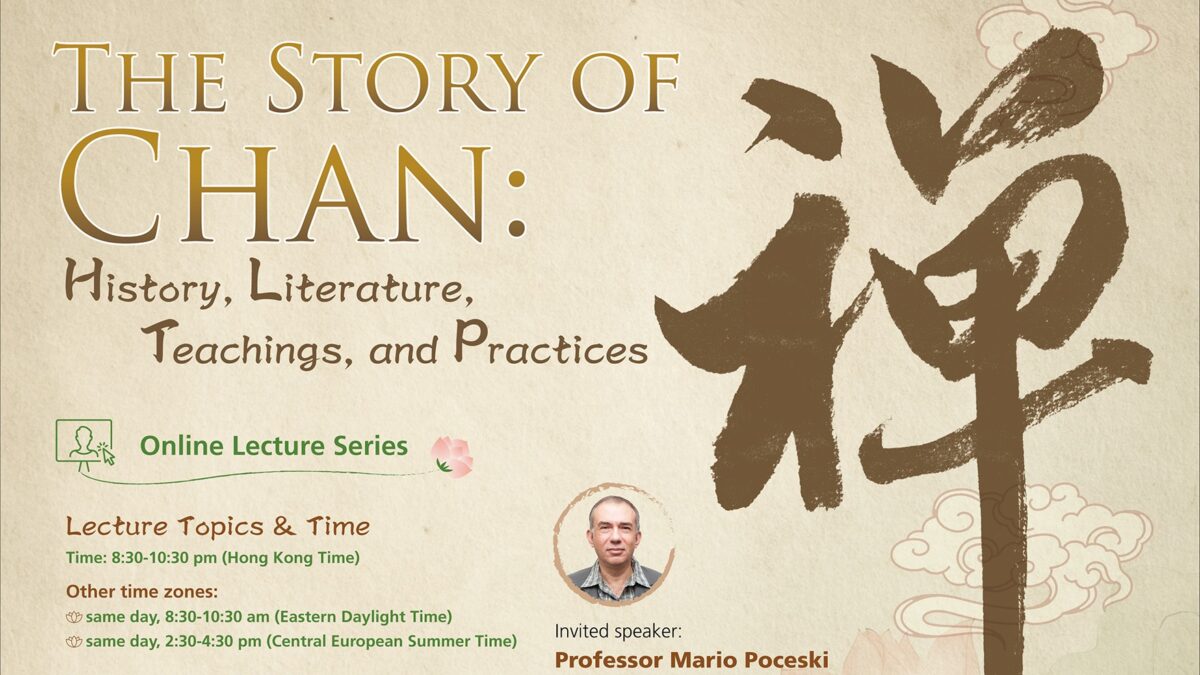 Lecture 1 (May 5, Thu): Bodhidharma’s Legend and the Early Making of a Chan Tradition

Lecture 3 (May 26, Thu): Baizhang’s Three Propositions and the Core of Chan Practice

Lecture 4 (May 31, Tue): Transformation of Contemplative Paradigms in Chinese Buddhism

Lecture 8 (July 14, Thu): Changing Roles of the Chan Masters and the Institutionalization of Chan

Lecture 9 (July 21, Thu): The Story of Nanquan Killing a Cat: Interpretation of a Chan Gong’an

Abstract: The series of ten lectures explores the emergence of the Chan school, the essential character of its doctrines and practices, and its historical growth into a major tradition within Chinese Buddhism. Each lecture addresses a particular topic, such as the ideas and legacies of important Chan figures, the evolution and distinctive characteristics of Chan literature, the singular visions of a progressive path of practice and realization, the renunciate ideals and institutional organization of monastic life, the changing images of Chan masters as exemplary religious figures, and more. At the same time, all lectures are connected and integrated into a larger narrative, with an aim of providing an in-depth survey of the broad historical trajectories and key facets of the Chan tradition, set against the social and cultural backdrops of Tang and Song China. Overall, the lectures included in the series focus on the formative or classical epochs in the long and fascinating history of Chan Buddhism, but they also serve as entry points for reflections on the contemporary impact and continuing relevance of Chan teachings and practices.

Mario Poceski is a professor of Buddhist studies and Chinese religions at the University of Florida. He received a PhD in East Asian Languages and Cultures (specialization in Buddhist studies) from the University of California, Los Angeles (2000), and has spent extended periods as a visiting professor or fellow at Komazawa University (Japan), Stanford University, National University of Singapore, University of Hamburg (Germany), Fudan University (China), and University of Erlangen-Nuremberg (Germany). He is a recipient of several prestigious fellowships, including Alexander von Humboldt and Fulbright-Hays. Prof. Poceski’s numerous publications include Communities of Memory and Interpretation: Reimagining and Reinventing the Past in East Asian Buddhism (Hamburg 2018, ed.), The Records of Mazu and the Making of Classical Chan Literature (Oxford 2015), The Wiley Blackwell Companion to East and Inner Asian Buddhism (Blackwell 2014, ed.), Introducing Chinese Religions (Routledge 2009), and Ordinary Mind as the Way: The Hongzhou School and the Growth of Chan Buddhism (Oxford 2007).

No registration required. Lectures conducted in English. All are welcome.

Organized by Centre of Buddhist Studies, The University of Hong Kong

* All materials presented in this lecture series are copyright protected. Please do NOT reproduce, distribute, publish, display, transmit, or in any way exploit any such content. The content presented is provided only for educational and informational purposes.