Guest Lecture: The Heavenly Masters at Longhushan: The origins of the modern Daoist bureaucracy 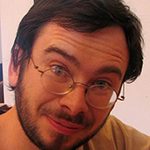