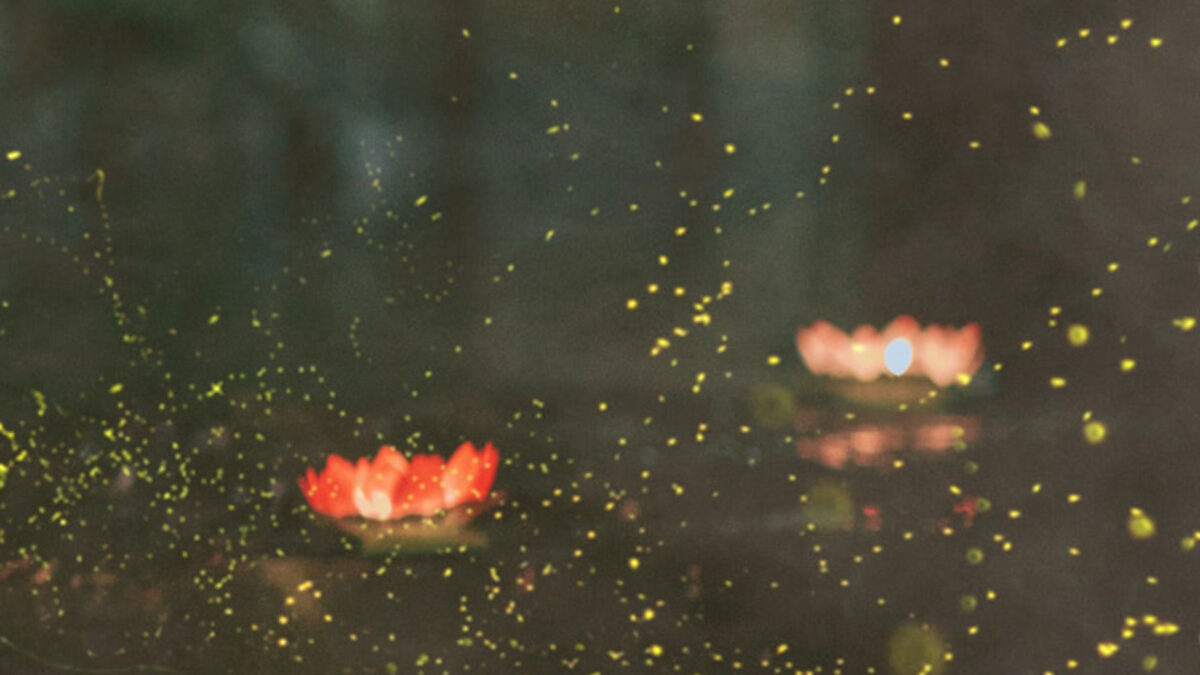 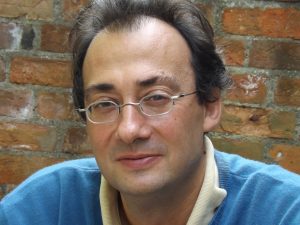 We are deeply saddened to share the news that Professor Stefano Zacchetti of University of Oxford passed away on April 29, 2020. As one of Glorisun Global Network’s founding and Steering Committee members, Professor Zacchetti generously supported the network’s programmes with great care and enthusiasm. We remain forever grateful for his contributions and compassion.

Details of memorials and dedications in his honour will be updated in due time. Please read the obituaries and announcement below.

Professor Stefano Zacchetti, who died on 29 April 2020 at the age of 52, was one of the world’s most distinguished scholars and teachers in the field of Buddhist Studies. His untimely death has shocked all of us who knew him and were fortunate enough to be his friends and colleagues. An intellectual of the highest order whose boundless energy and thoroughness showed in each and every one of his published papers and monographs in both English and Italian, he was also an exceptionally charming and generous man, a loving father, and a steadfast and loyal friend. As I sit down to write this tribute to the Yehan Numata Professor of Buddhist Studies and fellow of Balliol College, Oxford, I do it in the full knowledge that he would quite possibly have been embarrassed by it. He was a humble person. His attitude toward life was urbane, vivacious and light-hearted.

Stefano’s was a life well lived. He spent part of his youth in the beautiful Italian town of Stresa on Lake Maggiore. Perhaps because of this, he remained keenly aware of his natural surroundings and loved walking in the mountains. At the liceo classico of Novara, he received an early philological training in Latin and ancient Greek. He also studied music and played the viola well; he loved to immerse himself in the study of the sonatas of Tartini and Scarlatti. Far from being contemptuous of the academic rigours imposed on his youth, he was incredibly grateful to all those who taught him, including the Catholic priests of the Collegio Rosmini founded by the noted philosopher and theologian Antonio Rosmini. “Once a rosminiano, always a rosminiano” – he told me with his characteristic ironic smile when we first met at Sichuan University in 1992. For all his erudition, Stefano was a witty and convivial man who never took himself too seriously. He loved to tell funny stories, which he crowned with infectious laughter. He spent two happy and productive years in Chengdu, where he met his life partner, Yang Kan. They married before moving back to Italy, and then to Japan. Stefano absolutely adored their two children, Giulio and Livio. Their lives were cosmopolitan and multilingual, full of laughter, books, and long walks in their beloved alpine region of Cansiglio in Northern Italy.

Stefano’s life work was dedicated to the study of early Chinese Buddhist translations (2nd-5th centuries CE) and Mahāyāna sūtra and commentarial literature in Sanskrit and Chinese. As a young man, he was already committed to the highest standards of scholarship. His outstanding tesi di laurea (undergraduate dissertation) was a comparative study of all the Chinese versions of the Diamond Sutra from the Han to the Tang periods, running to almost 400 pages. Written with clarity and insightfulness in the beautiful prose that characterised all of Stefano’s writings, it included a masterful account of the textual history of a Mahāyāna scripture.

His penetrating and authoritative analysis of the language of the early Chinese translations of Buddhist texts is undoubtedly one of his major contributions to the field and one of the topics that preoccupied him for the remainder of his life. Of the intertwined worlds of translation and exegesis, he wrote in the Preface to his thesis: “For translation was always, for Chinese Buddhists, also exegesis, a lively knowledge-making process… not just an ἔργον but also, and mostly, an ἐνέργεια”. This sentence strikes me as almost autobiographical.

Contemplating the ever-increasing demands imposed on our time and that of our students, I find it remarkable that Stefano always knew that he should take his time: he spent years working assiduously on each of his publications. In his youth, he looked for congenial surroundings to pursue his studies and sought out scholars who could teach him Sanskrit and Classical Chinese, as well as Buddhist philology, including Giuliano Boccali, Maurizio Scarpari, Tillman Vetter and Erik Zürcher. How precisely to combine a deep knowledge of Buddhist Sanskrit and literary Chinese to study the obscure and stubborn idiom of the early Chinese translation of Buddhist scriptures is something he strove to understand all his life. We should all be grateful for the commanding results of his endeavours. Recently, he had revisited some of his early efforts in the article “Mind the Hermeneutical Gap: A Terminological Issue in Kumārajīva’s Version of the Diamond Sutra” in Proceedings from the Symposium “Chinese Buddhist Studies in the Past, Present and Future”, Foguang daxue fojiao yanjiu zhongxin 佛光大學佛教研究中心, 2015. This illuminating essay he dedicated to “the memory of my teacher Tillman Vetter”, whose photograph sat by Stefano’s desk in Oxford.

Stefano was known among his friends as an avid pipe smoker, a pipe collector and a bibliophile. He started building up his own personal library in his early 20s. He found Antonello da Messina’s painting of “St. Jerome in his Study” particularly poignant and for years kept a copy of it by his desk. In Venice, he had had access to a remarkable collection of books on India and East Asia, which were kept in stunning if unlikely surroundings at the Fondazione Giorgio Cini on San Giorgio Maggiore Island. He loved to cross the waters to consult the Taishō Tripiṭaka in the rooms of the collections of “Venezia e l’Oriente”, a memory he joyfully shared with others whose intellectual trajectories in Buddhist Studies, Chinese Studies and Japanese Studies had begun in the same rooms.

Stefano delighted in linguistic and philological challenges. Because he never forgot that the texts he painstakingly studied were created from human experience and imagination, he remained somewhat sceptical of theory pursued for its own sake: thoroughness and clarity grounded his work. He was convinced that the study of early Chinese translations of Buddhist scriptures represented a rich and largely untouched source for the study of the history of medieval Chinese. In particular, he was long interested in the relation between text and commentary, which, in contrast to prevailing views, he saw as an interactive two-way street. His ideas on philology, the value of early Chinese materials and the history of texts were most powerfully argued in one of his major works, a study of the prolific translator Dharmarakṣa’s earliest version of the Larger Prajñāpāramitā and its surviving parallel Sanskrit tradition: In Praise of the Light: A Critical Synoptic Edition with an Annotated Translation of Chapters 1-3 of Dharmarakṣa’s Guang zan jing 光讚經, Being the Earliest Chinese Translation of the Larger Prajñāpāramitā, Bibliotheca Philologica et Philosophica Buddhica VIII (Tokyo: The International Research Institute for Advanced Buddhology, 2005 [The pdf version is freely accessible online: http://iriab.soka.ac.jp/orc/Publications/BPPB/index_BPPB.html].). This monograph, a substantially modified version of his doctoral dissertation (originally written in Italian), which he had submitted to Ca’ Foscari University in Venice in 1999, is a formidable scholarly effort and an invaluable resource for many scholars. It is no exaggeration to say that even its introductory section on the lineages of Chinese Buddhist canons, which serves as a background to the actual study, is authoritative.

In an academic career that took him from Venice to Chengdu, Leiden and Tokyo, back to Venice, and finally to Oxford, Stefano held forth on Buddhology, the possibilities of translation, the history of philology, lexicography, textual hermeneutics, and Sinology. He is also the author of two beautifully crafted translations of Buddhist texts: Storie delle sei perfezioni. Racconti scelti dal Liu du ji jing [Selected tales from the Liu du ji jing T 152], Venezia: Marsilio, 2013, and Fazang – Il Trattato del leone d’oro, Esedra Editrice, Padova 2000 [Critical edition and annotated Translation of Fazang’s 法藏 Treatise on the Golden Lion 金師子章], with an introductory essay].

From 2001 to 2005, Stefano was an associate professor at the International Research Institute for Advanced Buddhology at Soka University in Tokyo, where he spent many happy years working in close contact with colleagues and friends who were very dear to him, including Akira Yuyuama, Seishi Karashima and Jan Nattier. His first child, Giulio, was born in Japan. When the family decided to return to Italy, Stefano became a tenured lecturer at the Department of Asian and North African Studies at the University of Venice, where he fondly enjoyed the friendship of many of his colleagues, with many of whom he also actively collaborated. During his time in Italy, he published two major articles; “A ‘New’ Early Chinese Buddhist Commentary: The Nature of the Da anban shouyi jing 大安般守意經 T 602 Reconsidered”, in Journal of the International Association of Buddhist Studies, Vol. 31, No. 1–2, 2008 (2010) pp. 421–484 and “Defining An Shigao’s 安 世 高 Translation Corpus: The State of the Art in Relevant Research”, in: Shen Weirong 沈 衛 榮 (ed.), Historical and Philological Studies of China’s Western Regions (西域历史语言研究集刊), No. 3, 2010, pp. 249-270.

In 2011, Stefano held a visiting professorship in Buddhist Studies at UC Berkeley and in 2012, he took up the position of Numata Chair of Buddhist Studies at the University of Oxford, a move that helped strengthen the Asian Studies faculty of both Balliol College and the university. His experience of a variety of environments no doubt made his shift to Oxford all the more successful. While there, he kept up his international activities and was a frequent visitor to China, where he was regularly invited to teach in intensive Buddhist Studies training programmes and summer schools. This he did with considerable panache. He was a popular and inspiring teacher who often achieved impressive results from his undergraduate and postgraduate pupils.

Stefano relished the major intellectual challenge of breaking new ground in his multifaceted field and was also, equally, generous in acknowledging his peers’ contributions to his work. His closest colleagues and teachers were also his best friends. He loved reading and translating Buddhist texts together with other scholars in Europe, Japan, Taiwan and the United States and worked tirelessly to set up and convene online and offline gatherings. In his college life at Balliol, he enjoyed the civilized and cosmopolitan atmosphere, in which he could, for instance, discuss Italian literature, in Italian, with the college fellows. The opportunities for conviviality and good conversation were a perfect match for his character. At the time of his passing Stefano was putting the finishing touches to a book titled The Da zhidu lun 大智度論 (*Mahāprajñāpāramitopadeśa) and the History of the Larger Prajñāpāramitā: Patterns of Textual Variation in Mahāyāna Sūtra Literature (Forthcoming from Hamburg Buddhist Studies).

We will miss you terribly Stefano, caro amico. 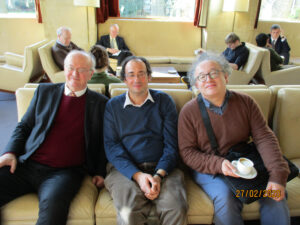 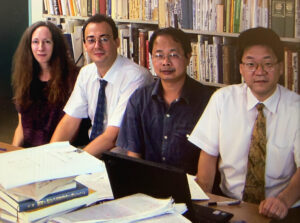 It is with immense sadness that we announce the death of Professor Stefano Zacchetti, BA, PhD Venice, Yehan Numata Professor of Buddhist Studies and Professorial Fellow of Balliol. He died suddenly on 29 April 2020.

Before joining Balliol in 2012 he was from 2001 to 2005 Associate Professor at the International Research Institute for Advanced Buddhology (Tokyo), and from 2005 to 2012 he worked as a tenured lecturer (ricercatore) at the Ca’ Foscari University of Venice, Department of Asian and North African Studies. In autumn 2011 he taught as a Visiting Professor at the University of California, Berkeley.

Dame Helen Ghosh (Master of Balliol) writes: ‘Our first thoughts are, of course, with his family in their terrible loss. The loss to us as a community is not just of his outstanding scholarship and inspiring teaching, but also of the warmth, good humour, friendship and boundless curiosity with which he enriched our lives in College. We will miss him enormously.’