Guest Lecture: The Play of Formulas in the Early Buddhist Discourses 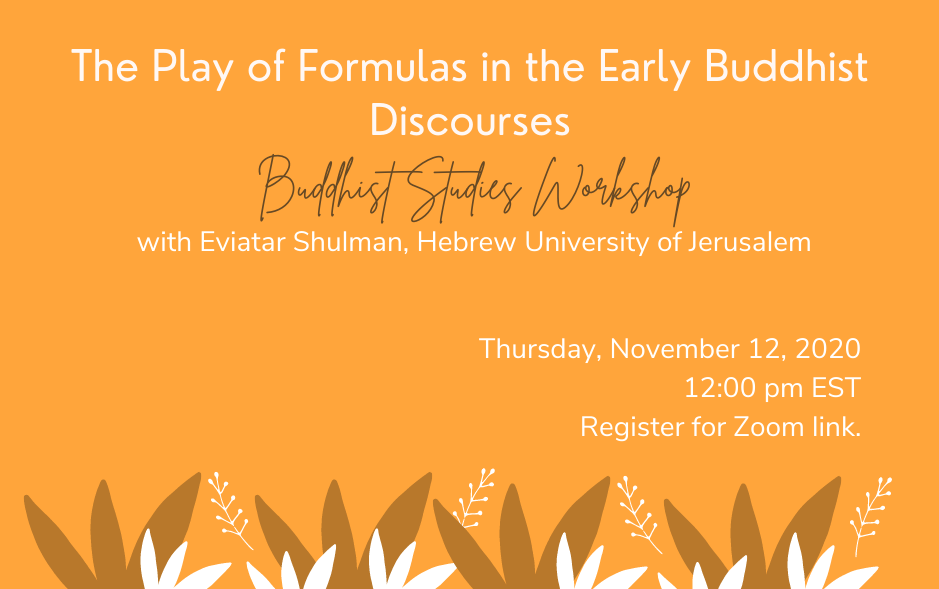 Abstract: The play of formulas is a new theory designed to explain the manner in which discourses (Suttas, Sūtras) were composed in the early Buddhist tradition, and especially so in the Dīgha- and Majjjhima- Nikāyas (the collections of the Buddha’s Long and Middle-length discourses). This theory combats the commonly accepted views in scholarship that texts are mainly an attempt to record and preserve the Buddha’s teachings and life events. Rather, driven by a variety of creative vectors, mainly literary and contemplative ones, the texts betray a rich engagement with the figure of the Buddha and a visualization of his figure. The play of formulas explains how formulas – the basic unit of Buddhist oral textual culture – combine in order to produce meaningful textual patterns and statements. Formulas connect according to set narrative designs, in which different types of audiences are represented not only with their unique formulas, but also with their specific narrative trajectories and complementing doctrinal emphases. It is not that the early authors were not at all trying to preserve the Buddha’s words. It is only that there was much more going on, and that thinking about the early Buddhist texts in this way misses all the fun, and ignores their beauty. These probably tell us more about what the texts actually were for the people that first produced and studied them than dry formulaic doctrine.

About the speaker: Dr. Eviatar Shulman teaches in the Departments for Religious Studies and Asian Studies at the Hebrew University of Jerusalem, where he received all his academic degrees. He recently spent 3 years as a post-doc at the Mandel Scholion Center and taught at numerous other Israeli Universities before happily landing at HUJI. Shulman’s main field of expertise is Buddhism. In earlier stages of his career he focused on philosophical materials, mainly those of the great Indian Buddhist thinker Nāgārjuna. Then he moved to study early Buddhist philosophy and its relation to meditative techniques, an inquiry that led to his book Rethinking the Buddha: Early Buddhist Philosophy as Meditative Perception. He remains interested in Buddhist philosophy but is more concerned today with religious and literary aspects of Buddhism. His research and teaching also concern Indian philosophy and religion (Hinduism).