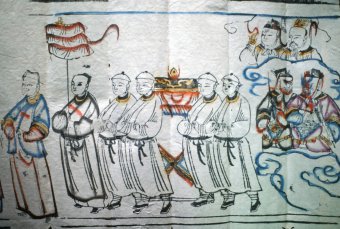 Featured Picture: Woodblock of a Daoist ritual from a priest’s register of deities, ca. 1950. Courtesy of Stephen Bokenkamp.

The Zhengao 真誥 or Declarations of the Perfected is a collection of revealed material and textual fragments assembled by the eminent scholar and Daoist Tao Hongjing 陶弘景 (456-536). The revelations included poems, instructions, and meditation methods received by the Daoist Yang Xi 楊羲 (330-ca. 386) from a new class of deity (Perfected beings 真人) and shared by him with his patrons and students in a single family, the Xu’s. The recipients were not passive, but responded with questions and remarks of their own, prompting further revelations. Given the piecemeal survival of the textual fragments, the distance from us in time, space, and language, and a radical shift in spiritual concerns, what strategies give us some small hope of understanding this collection?

Stephen R. Bokenkamp is the Regents’ Professor at the School of International Letters and Cultures at Arizona State University. He specializes in the study of medieval Chinese Daoism, with a special emphasis on its literatures and its relations with Buddhism. He is author of Early Daoist Scriptures and Ancestors and Anxiety as well as over thirty-five articles and book chapters on Daoism and literature.  Among his awards are the Guggenheim Award for the Translation of a medieval Daoist text and a National Endowment for the Humanities Translation grants.  In addition to his position at Arizona State, he has taught at Indiana University, Stanford University, and short courses for graduate students at Princeton and Fudan Universities. He was also part of the National 985 project at the Institute of Religious Studies, Sichuan University from 2006-2013.

To learn more about this event, see the original page here.